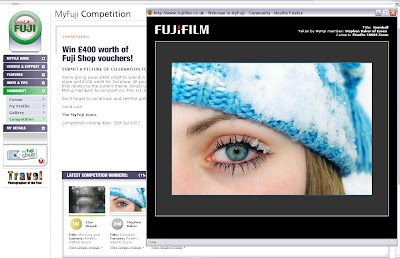 Click on the image above to see the large version. This shot was stolen from here and used to win second place in a Fujifilm competition.

We all know that images get stolen from the Internet but two recent examples really take the cake. A certain Stephen Baker from Essex appears to have stolen an image, taken by Pamela DG, from a popular photo-sharing site and used it to win second place in a Fujifilm online competition. The prize money he is accused of fraudulently obtaining is £200 pounds.

It is unbelievable that people think they can steal photographer's images from the Internet and use them for their own purposes.

Another much publicised case revolves around images plagiarised from a popular flickr photographer. The company that allegedly stole them produced canvas prints and sold them for a healthy profit without the photographer knowing anything about it. The whole thing erupted into a bit of a dispute with flickr but that has all settled down now.

The heart of the issue remains that as a photographer we unfortunately expose ourselves to the theft of our work every time it gets uploaded, even relatively small low resolution versions. It's not the first time that I've heard of supposedly respectable companies riding rough-shod over copyright laws.

I hope the thieves get their just deserts and Fujifilm should certainly retrieve their prize money and take whatever action they can to discourage this kind of thing in the future. Condoning it will hardly do their brand much good amongst us photographers.

I'll keep you posted if I hear anything else. I happen to know the photographer's mother who brought this incident to our attention on a forum.

Stay safe, and please if you come across any images you think have been plagiarised let the photographer in question know and drop me a line too.

Ruel Tafalla said…
Fuji should have checked the Original Image from the the winners. Unless the owner of the image posted his original file online, then that's another story.

Silke said…
Paul
The link to that forum is now dead for some reason.
And I agree that Fuji really should have done a bit of homework before paying out money.
Welcome home from your holidays

Popular posts from this blog

All the different types of photography

November 22, 2007
I am not against amateurs and semi-professionals selling their photography. It's a great way to earn some extra cash. However I am concerned about the level of high quality published work and the standards that clients and the public accept these days. It seems that just about everyone is a photographer. The line between amateur enthusiast and professional is fuzzy to say the least. Photography enthusiasts are selling their images through stock libraries and microstock websites, directly to magazines or through their own and third party sites. They're accepting commissions to shoot weddings, being hired to shoot for magazines and selling fine art prints from their websites. They're teaching photography on the weekend and guiding photographic holidays and safaris. Photography became accessible to the masses with the first non-expert cameras and the famous Kodak slogan"You press the button, we do the rest." The digital camera age has taken the whole thing to a
14 comments
Read more

The art of writing a caption

February 11, 2006
A caption in its simplest form is the the title of an image but usually we mean a bit more. A full caption takes the form of descriptive text, usually a few sentences. A good caption informs us about the things we cannot see and encourages us to look at an image more closely. There is a relationship of mutual benefit and dependence between a well written caption and an image. The caption can bring an image to life by providing context and meaning. It is also the link between the article/story/text and the image. Magda Indigo has written a good description of a caption here . I agree with her dislike of "untitled". It does show a certain lack of imagination and is not particularly helpful to the viewer. Creating an image is all about trying to communicate something and the caption is vital to help the audience understand an image. It can hugely enhance the viewers experience. A good caption is a piece of writing that should be concise, accurate, informative and as carefully
1 comment
Read more

Beyond the obvious
Here's a link to my About Me profile https://about.me/paul_indigo